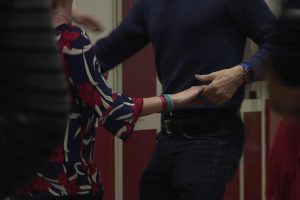 Roberto, Domenico, Mario and Olivier are men united by the desire to build a future in which the male figure moves away from prevarication and power and is instead guided more by inner emotions. A future that as kids they couldn’t even imagine. At the Height of the Heart tells their stories and the ones of the men they meet thanks to their activities like the gender and stereotypes workshops for school-aged children (run by the Circle of Men of Turin) and the laboratory and show of the Theater of the Oppressed that Olivier organizes with men from diverse backgrounds and cultures.

A common thread runs through all of these experiences: the need to have meaningful relationships with others from which develops an uncertain, but promising, unprecedented search for awareness and freedom, a new idea of what being a man means.

developed in co-production with
RAI Doc

After graduating in History and Criticism of Cinema at the Sapienza University of Rome, Paola Sangiovanni (Roma 1965) started working as an assistant director and script supervisor for films and TV productions. In the same years, she started working as a film director.

She was also one of the founders and now sits on the academic board at the Gian Maria Volonté School of Film Art in Rome, a free and public film program financed by Regione Lazio.

Her research has primarily been focused on the themes of memory and the construction of gender models. Amongst her documentaries are “Ragazze, la vita trema” (Italy, 2009, 83′, color and b/w) and “La linea sottile (Ita-HR, 2015, 90′, color), co-directed with Croatian director Nina Mimica.